⚠️ It’s hard to convey sarcasm over the text. I’m putting this disclaimer at the top so I don’t come off egoistic. This post is meant as hyperbole, and I’ll leave finding the truth to any statements to the readers.

Aaron Bertrand (t) recently wrote a post Why I always start CTEs with a statement terminator.

So I’ll take it one step further.
I’ll never use semicolons unless I have to.

Tools like Redgate’s SQL Prompt can add semicolons automatically, but I still won’t do it. 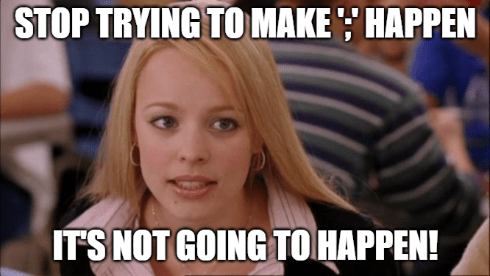 These are the reasons why 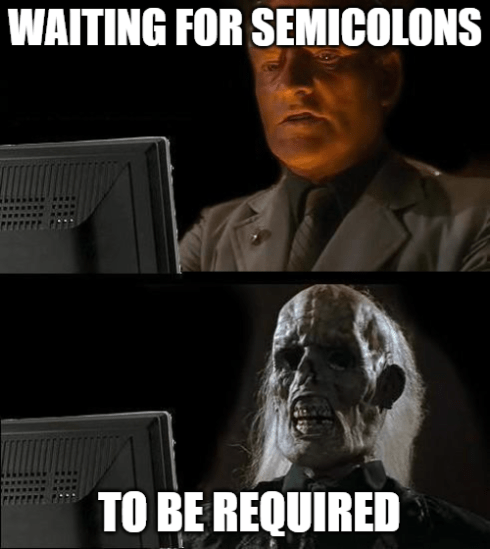 My code is not set in stone. So I have to move this clinging semicolon out of the way whenever I want to update.

Selecting the space before the semicolon is like separating two thin Lego pieces. I hope you have a large font and precise mouse 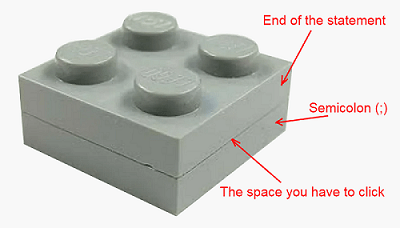 Let’s take this query as an example

It’s just more work for no benefit at all.

Heck, I don’t even end all my messages with an interpunction.
And be honest with yourself, do you?

I’ve skipped a few full stops on purpose, have you noticed? 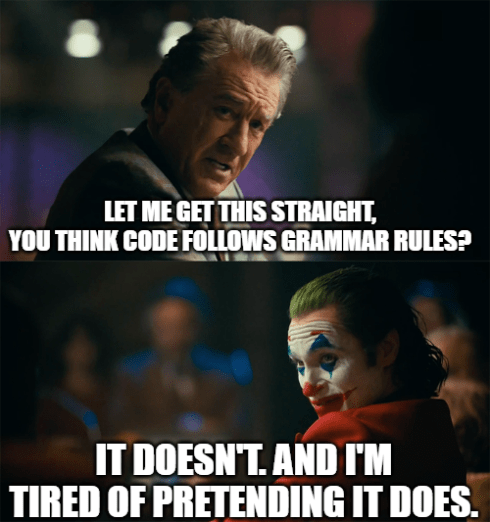 First, let me ask you this. Do you write the conditions in the WHERE clause like this

I’m using the first style because

Me using leading commas is just being consistent.

Having all commas moved out of the way at the start of the line is good for mass column updates using ALT + Drag. Also, since the whitespace at the end doesn’t count, I can quickly wrap my columns in code and add aliasing, comments, etc.

Not saying converting all columns to VARCHAR(200) is a good idea, but here is a demo:

I’m mainly using SSMS. The Visual Studio Code or Azure Data Studio are close with the Multi-cursor (drag middle button), but not quite.

Just when you thought you couldn’t hate my style more - BAM, out of the left-field with the aliasing.

“How can you tell what table p means? It’s better to use the full table name or meaningful alias”

Well, that’s easy, you see.
I start reading the code in the FROM clause. Also, I’ve trained myself to keep multiple things in short term memory.

This handy script shows you the number of conflicting alias initials.

What about the other stuff? 🔗︎

And that’s because most of the time, I don’t care. I only care if it has any practical implications (performance, readability, etc.), but none of it is a hill I’m willing to die on. Not even the semicolons or leading commas are worth it.

Try to make an argument for your code style, but in the end, agreed guidelines and consistency should always win. Just hope that there is an automatic formatter that can fix your code.

Thank you for reading.