This time a colleague from work asked how to best find a culprit that has been changing a specific cell in a table. It could be an automated process, application logic, application user or even an ad-hoc statement - we didn’t know. The table has many different access patterns, some of which are frequent. Ideally, we don’t want to monitor everything and sift through it.

We wanted to learn the who, the how and then ask why? If you like to know the whole journey, read on. Otherwise, you can skip to section Eureka moment

From the top of my head, I thought of these options:

I admit I haven’t used Audit before (I just knew of its existence), so it was an opportunity to try it out. You need to:

2. Data mine the Query Store 🔗︎

Query Store has aggregated data, so I knew I won’t be getting any specific query execution. I was here to map out all the access patterns and perhaps pass the signed query hash to Extended Events.

I didn’t have a sophisticated method, just a full-text search on sys.query_store_query_text.
I was looking for the table name along with the MERGE or UPDATE keywords.

But there were just too many hits - it would get me maybe closer, but I still wouldn’t know specifics.

At this point, there was still nothing to filter. I could grab all the query hashes I’ve got from mining the Query Store, but the update could come from a different query next time. I could collect everything and filter, but SQL Audit would do a better job.

Triggers are often misused and get a bad reputation, but this is a perfectly fine use case. All I need is an AFTER UPDATE Trigger and a logging table - easy peasy. While the Trigger fires on each UPDATE, I’ll have logic inside to only log information on certain conditions.

I can use the HOST_NAME(), ORIGINAL_LOGIN() and other functions to capture the who info.

What I was missing was how? Was it an ad-hoc statement, Stored Procedure or something else? I wanted to capture the input buffer. I thought there might be a function for that but couldn’t find it.

All I needed was to query the DMVs. But that requires a VIEW SERVER STATE permission. That invalidates the Trigger, so I need to use the Module Signing. That means creating a certificate, creating a Login, etc. Which felt like a lot of work for a simple auditing task. Especially, if you do that infrequently. Or when you are new to Module Signing.

It’s a shame! I already had the who figured out. I was halfway there!

Why do I have to use just one tool to finish the job? I wanted to combine the Query Store hash information with the Extended Events. I can instead combine it with the Trigger!

Within the Trigger, I have logic to filter the exact changes I’m interested in.
And with the Extended Events, I can monitor only the statement in my Trigger logic and grab all the other auditing info - especially the input buffer and the tsql stack. 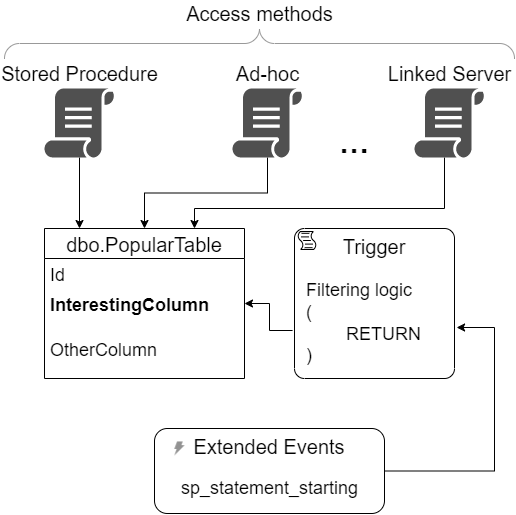 Finally, I had both the who and how!

Let’s create a table and some data.

Next, I’ll create an AFTER UPDATE Trigger on this table. Inside I’ll check just updates to row with an ID = 2 and InterestingColumn. Additionally, I only want to alert when the value changes.

Apart from the check, the Trigger doesn’t do anything. We will set up an Extended Events session that will watch the execution of this Trigger but only the RETURN statement inside the IF - which has a query_hash_signed = 0.

For your use case, you’ll want to add a file event target as well as tweak the collected actions.
In this case, Watch Live Data will do just fine.

With all the pieces arranged all that is left is some access code and test scenarios.

I’ll create a stored procedure to test the first few test cases and then use ad-hoc UPDATE and MERGE statements.

Let’s call each test in separate batches, so our monitoring sql_text is clean. Don’t forget we are only interested in row 2 InterestingColumn change.

As expected - the first two tests resulted in no event captured. The other three are there with their respective sql_text.

Get alerted on new events 🔗︎

Now, this is well beyond the scope of this article, but you can use dbatools Powershell module to automate alerting. You can tweak this snippet to add a smart target to our existing XE session, and you’ll get an email notification on the next event.